Now chairman of the Orange County Transportation Authority, he returned to infamously steep Nyes Place in Arch Beach Heights this week for another reason. From one of two remaining undeveloped lots at the dead-end of Barracuda Way, Lalloway stepped over prickly pear cactus and pushed aside toyon branches to behold the still mostly untouched coastal foothills that enfold the town and spill towards the sea.

“This is a generational impact on the environment,” declared Lalloway of OCTA’s purchase last week of 151 acres of open space, its first coastal acquisition under a nearly decade-old environmental mitigation program.

The $2.2 million acquisition was funded by Measure M tax proceeds, approved by voters countywide in 2006 to pay for freeway improvements and restore habitat over 30 years. To date, more than 1,300 acres have been acquired by OCTA in seven separate deals concentrated in the less developed southeast section of the county.

“The Aliso Canyon acquisition is absolutely crucial,” said Derek Ostensen, a board member of the Laguna Canyon Foundation, which had also worked to safeguard the property from potential development.

The property is considered a high priority because it supports diverse habitat types, including chaparral, coastal sage scrub and native grassland. Biologists identified 26 special-status wildlife species such as gnatcatcher, falcons and horned lizards on or near the land and another six plants with special-status growing across its slopes. They include the rare species of dudleya, crownbeard and mariposa lily, says an OCTA report.

The acquisition also preserves public access to an existing trail from Moulton Meadows. Along the trail, hikers take in unobstructed hillside and ocean views as they traverse a ridgeline dividing Hobo and Aliso canyons and exit near Ocean Vista Drive, blocks from the sea.

“This was the largest and most biologically diverse property with public access that remained,” said Ostensen.

The willing seller was the developer Athens Group, which controlled 249-acres in South Laguna as part of an ambitious redevelopment plan for the former Aliso Creek Inn and Golf Course. That 2007 project has since been abandoned and the hotel and golf property sold in 2013. But Athens, too, had envisioned ceding much of the property as open space, according an April 2007 fact sheet.

“We were pleased to have worked with OCTA in dedicating this valuable resource as open space for the community to enjoy for generations to come,” Athens vice president John Mansour, a representative for the landowner, said in a statement this week.

Today, though, a remaining 75 acres known as the Driftwood Estates, part of the redevelopment project and once earmarked for eight trophy homes, was excluded from the OCTA deal and remains in private hands. It has been offered at no cost to several entities, none of which have accepted the offer, Mansour said.

Liability concerns stemming from illegal grading on the property by the previous owner remain an obstacle to its donation. Laguna Beach declined the offered land because the Coastal Commission staff signaled it would not support permits to address drainage and stability improvements deemed necessary, City Manager John Pietig said.

The Driftwood acreage has already been set aside as a conservation easement and thus would be ineligible as mitigation credit for OCTA, said Dan Phu, OCTA’s environmental program section manager.

Who will manage OCTA’s open space holdings has yet to be determined, but $35 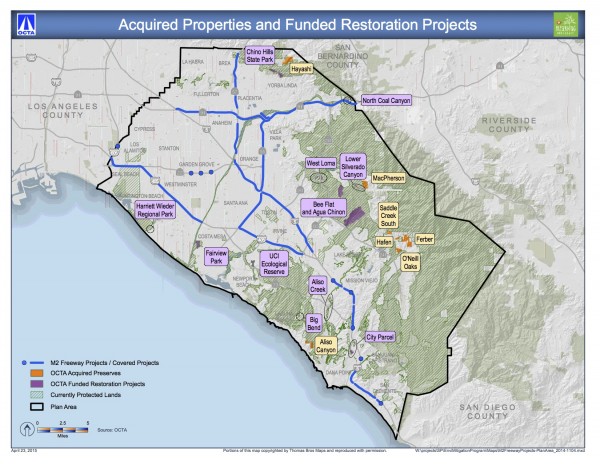 million has been set aside for an endowment to manage in perpetuity the seven properties purchased so far, Lalloway said.

Because the properties are spread around the county, different non-profits or city governments with proximity or interests may ultimately manage the properties individually, he said,

OCTA’s environmental oversight committee set many criteria to prioritize potential acquisitions, Carpenter said. Its members include representatives of state and federal wildlife agencies that had agreed to the land mitigation as a tradeoff to expedite freeway projects, he said.