Kathy Coakley was watching her son play in a Laguna Beach High School baseball game last year when a batter, Brett Tracy, fouled a fast pitch off his bat and directly into his right eye.  The ball smashed into his eye socket and the impact instantly broke his cheekbone; he was bleeding from his mouth and nose. 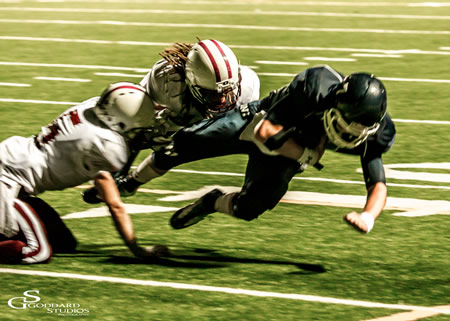 “Blood just flew everywhere when this happened,” recalled Brett’s dad, Richard Tracy, who, with his wife Marianne, had raced to their son’s side.  “He didn’t move. It was a very scary situation. That pitch must have been going 120 miles an hour when it hit him.”

Coakley, said Tracy, went into action. A physical therapist and 28-year athletic trainer who has worked with NFL athletes and the Olympic gold-medal U.S. women’s water polo team, Coakley stopped the bleeding on the spot.  “It was chaotic,” she said.  Brett’s mother was frantic with questions about where to take her son, what kind of care he needed, who he should see and what about recovery.  “That’s when my head went spinning,” said Coakley.  “I said, ‘This is not right.  This cannot go on here.’ ”  Brett was rushed to the nearest emergency room, but no follow-up monitoring was provided.

That is beginning to change. This week, the school district announced that every high school athlete, as well as cheerleaders and dancers, can get tested to establish baseline measures of their health. One part of the assessment is a computer-based program that measures the brain’s ability to recognize and respond.  The tests provide an individualized baseline for each athlete’s health and will be used to determine full recovery if an injury such as a concussion occurs.

Kent Chesley, president of the Football Boosters, worked in tandem with Coakley to develop the comprehensive health assessment and an additional insurance package for the football team. “Our question was, how do we get in front of the issues that are plaguing the NFL that will eventually plague colleges and eventually plague high schools?” he said.  “It will just roll down the hill.  How do we make this sport as safe as we can?”

Student athletes already are required to undergo an annual physical exam. Now, a half-dozen medical specialists, some of whom live in Laguna, are available to consult with and aid an injured athlete as soon as their cell phone rings and an orthopedic surgeon will be on the field at every football game, said Chesley.  Coakley rounded up the on-call medical consultants while Chesley negotiated for supplemental insurance. With help from Dean West, assistant superintendent of business services, Chesley negotiated the price down to $3,450 annually, or $50 for each of the 70 football players. The supplemental insurance defrays medical costs by 60 to 90 percent, all complements of the football boosters, he said.

The district weighed in by remodeling the high school training room and adding new treatment tables, so athletes can now receive treatment for minor injuries with laser light therapy and a percussion device to stimulate or relax muscles.

“I did give them a little wish list and it was all accomplished,” said Coakley, who credited football boosters with accomplishing the task before football practice got underway this summer. Such a health package, offering the same caliber of services provided professional or Olympic athletes, would normally take more than a year to implement, she said.

“It was mind-blowing what happened when the community and the district came together and did this.  There was no stopping it once it got into motion,” Coakley said.

Citing one football player who was belatedly diagnosed with a fractured hip prior to the program’s implementation, Chesley said the groundwork to prevent that scenario is now in place. It’s up to the booster clubs for other sports to add supplemental insurance, to line up available physicians and to press students to participate in health screening. “It’s all lined up, all the roadwork is done.  They can either drive down this road and opt in and replicate or they do just the concussion part or they can do the full-body exam,” Chesley said.

As one of the steps in the program, the football boosters’ club just purchased the safest, high-tech football gear, including concussion-free Zenith helmets, for all 70 players.

Propelled by high school principal Joanne Culverhouse and athletic director Mike Churchill, the district’s decision to expand testing for concussion to all other high school sports was partially prompted by a new study on brainwave testing in cheerleaders published in the Journal of Pediatrics.

If injured, most student athletes will downplay their pain and symptoms in order to stay in the game, according to the co-author of the study, Gary Solomon, Ph.D., associate professor of Neurological Surgery, Psychiatry and Orthopedic Surgery and Rehabilitation at Vanderbilt University Medical Center.  Continued performance often determines college scholarships and acceptance on prestigious college teams. So the student puts on the pressure to shake it off and play on.

“It is not a wise practice to focus on symptoms alone. Symptoms are an important piece of the puzzle, but you also need to factor in results from neurocognitive testing and balance assessment and listen to what parents are saying,” said Solomon in an article published by Vanderbilt University Medical Center.

While students may minimize their symptoms in order to continue to play, the school’s new emphasis on baseline health tests provides a tool that could avert permanent damage. “Kids that gut it out, so to speak, I don’t think they report their injuries anyway,” Churchill said. “That’s the job of our trainers and coaches to identify them and not really listen to the kid.”

Churchill said that recording response and recognition time in neurocognitive testing and then retesting after injury could be life-saving later on for those few athletes who do get seriously injured. “Some people are, by the way they are, a little goofier than others,” he said.  “You just want to know where they’re starting from.”

Rivian’s Proposes Iconic Renovation of South Coast Cinemas with a Multi-Use Theatre, an Ocean-View Patio and an Electric Car Display