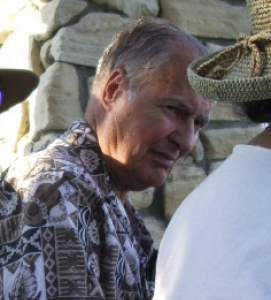 He was 86, had lived in Laguna since 1976, and recently fell and was hospitalized.

His wife of 61 years, known as Kit, died in October 2010. They most their Mystic Hills home in the 1993 fire, but moved back to the rebuilt structure within a year.

“He was so into everything in Laguna,” said his daughter, Susan Conner, who recalled her father’s “quirky expression,” joking about his own death. “I’m already in heaven,” he would say of Laguna.

A memorial service will be planned for Drollinger in town in the very near future, Conner said.

Drollinger, an engineer who graduated from Columbia University, sold electric instruments to universities.

“You know I don’t think there was a public meeting that Ed didn’t attend when he could. He was always so kind and thoughtful of everyone,” said Carolyn Wood, founder of the Laguna Canyon Conservancy where Drollinger for 15 years took reservations for 100 people at monthly meetings. “We will never forget Ed’s help and dedication,” she said.

Born in Fergus Falls, Minn., on Dec. 14, 1927, she loved to sing and was the vocalist for the Men About Town dance band. She graduated from Spokane’s Lewis and Clark High School in 1944.

Bobbie had two great loves in her life – Neil Meyers and Marvin Irwin. Bobbie married Neil Meyers in 1950 and raised a family of six children in Spokane. Neil passed away in 1984. Love came a second time around for Bobbie and former high school friend Marvin Irwin after the death of their spouses. They married in 1987, sharing a life full of love, laughter, travel, family and community service, which lasted for 24 years with homes in Laguna Beach and Kenmore, Wash.

Irwin channeled her creativity and artistic passion into the pursuit of interior design. She had a successful career as an interior designer in Spokane, Seattle and Laguna. She was active in Laguna’s  Neighborhood Congregational Church as well as an enthusiastic supporter of the Laguna Playhouse, No Square Theater and all the musical theatre productions at Laguna Beach High School.

Irwin always said that her greatest accomplishment and reward was in raising her family. She took tremendous pride and joy in time spent with her children, grandchildren and sharing in all of their accomplishments.  Wife, mother, aunt, grandmother, and friend, she will be missed by all.

In lieu of flowers, donations can be made in her name to the Susan G. Komen Seattle 3Day Walk at
www.the3day.org/goto/BarbaraIrwin.