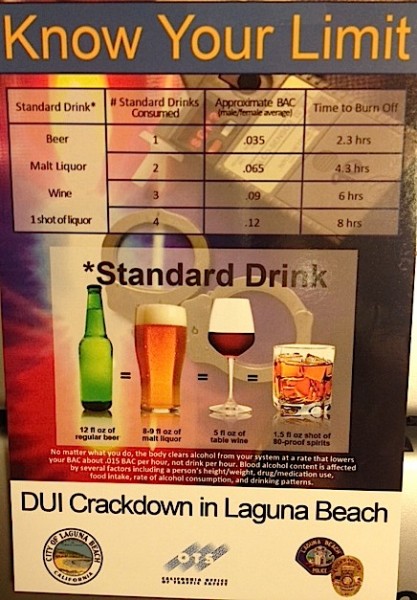 Local police are trying a tactic other than handcuffs to discourage drinkers from getting into the driver’s seat.

Test-driving a program called “Know Your Limits,” officers managed to convince 50 bar patrons, one third of whom were locals, to take an alcohol screening test at various establishments, including, Hennessey’s Tavern, the Marine Room, the White House, the Saloon, Laguna Sushi and Brussels Bistro.

“Most of them believed that they were not under the influence,” said Lt. Jeff Calvert. Even so, 18 test takers showed alcohol levels above the legal limit and most of them, before the test results, had planned to drive home.

Imbibers, newly cognizant of their limits, received an Uber voucher.

“We fully support trying to make Laguna a more pleasant and safer place,” said Sarah Karros, general manager at Hennessey’s Tavern, adding that they are excited about the program.

In a report to the City Council last week, Calvert said police were pleasantly surprised that not only was the pilot program in January well-received by the bar owners, but patrons also appreciated the learning experience once they understood the screening was not to trap them into a DUI. And each volunteer, regardless of their test results, received a $20 Uber voucher for being good sports.

As a measure of the breadth of the problem, among 109 cities in the state with similar populations, Laguna Beach ranks first almost every year with the most driving while under the influence arrests, according to the state Office of Traffic Safety, which tracks law enforcement statistics. The survey’s ranking by population doesn’t account for the tourists who regularly inflate Laguna’s head count much of the year, Calvert said.

Nevertheless, since last Labor Day, police have been looking at ways to reduce the statistic and DUI-related traffic accidents, “not just arresting our way out of the situation, but having a layered approach of education with the community and our business owners,” Police Chief Laura Farinella said.

In addition to assigning an officer to patrol downtown on foot Thursday through Saturday, Calvert and community services officer Nikie Hernandez have teamed up with the local branch of the OTS and Uber car service to “get people home safely” by educating them on the effects of drinking and helping them to be responsible, said Farinella.

Given the DUI arrest rate in Laguna, “we wanted to take a different approach to this problem and see if we could educate drivers before they got behind the wheel after drinking,” said Calvert.

Searching for a new tool, they hit on the “Know Your Limits” campaign successfully deployed by Huntington Beach police, who assisted with Laguna’s trial run of the program. Uber reps tagged along on that operation as officers canvassed the local watering holes, along with a KCAL 9 news crew who interviewed Sergeant George Ramos and some of the alcohol screening volunteers.

It is very difficult for most people to have a good sense of their blood alcohol level once they’ve had a few drinks, said Calvert.

Based on January’s results, Calvert said he has gotten approval for a grant to begin the Know Your Limits program in Laguna at the end of the year.

But even before the new grant begins, officers will still reach out to bar patrons when they can, if not offering tests, at least handing out info cards and Uber vouchers, said Calvert.

“It sounds like a thoughtful approach to a recurring problem, so hopefully we’ll make an impact with it and change some minds and save some lives,” said Laguna Beach Mayor Bob Whalen.