By Mia Davidson and Jan Sattler 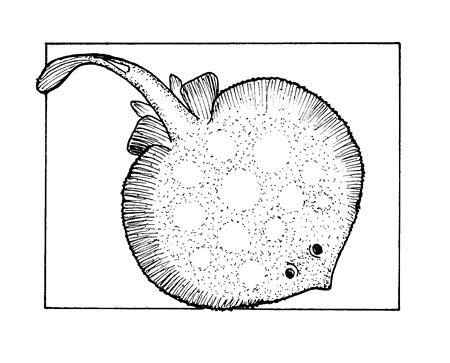 The round stingray (Urobatis haller) is one of the two most common rays found in Laguna Beach. It is scientifically classified with skates and sharks because its skeleton is made of cartilage instead of bone. Reaching a maximum of 22 inches in total length, it has a circular flat body that is on average six to 10 inches in diameter.  Its tail is short and stout with a venomous barb located half way down and ends in a leaf shaped fin.  The top of its body, where the eyes are located is highly variable in color in shades of gray, brown, tan and pinkish, sometimes mottled with a pattern of light spots which against the background of a sandy bottom, acts as camouflage from predators such as sharks, giant black sea bass and other large carnivorous fish. The underside, where the mouth and gills are located, is pale in color.

Swimming in an undulating manner along the bottom of the ocean, the round stingray propels itself by using “wings”, the pectoral fins that circle the periphery of their body.  They rest motionless on the sandy bottom, partially covered or fully buried in sand where they forage for prey.  Daytime feeders, round stingrays rely on the senses of sight and smell to find their food which include some small fish, but mostly benthic (bottom-dwelling) invertebrates like shrimps, clams, crabs and other small mollusks.  They live approximately eight to 12 years.

California stingrays tend to segregate by age and sex with females living in deeper water of around 50 feet and males and juveniles living in the warmer shallows of less than 50 feet in soft bottom areas like sandy beaches, muddy estuaries and sloughs.  In addition, they are often in waters warmed by coastal power stations.  Although they occasionally reproduce biannually, the main mating season for the round stingray is between January and June in shallow water.  The three-month gestation occurs in deeper waters.  Between June and September, the females move inshore to give live birth to up to six fully formed babies, which are two to three inches in width. Juveniles inhabit shallow waters of 12 feet or less until they grow large enough to move to the deeper waters.

They are most commonly found from Southern California to northern Baja California. They seem to aggregate in large numbers where the water is warm and calm.  At certain times of the year, they gather close to shore in Laguna Beach where beachgoers can encounter them.  Lying in the sand, if threatened, the California stingray whips its tail and thrusts its venomous barb into a victim.

If stung, immediately notify the lifeguard.  Symptoms include a sharp pain from where the barb enters the body, radiating pain that can increase as the venom is released over several hours, and redness and swelling of the affected area.  As the toxin is heat labile, water-soluble, soaking the affected area in very hot water over several hours can break down the venom reducing the pain. If there is any indication that any part of the barb is still in the body or an allergic reaction such as nausea, dizziness, difficulty breathing or symptoms of going into shock occur, seek immediate medical attention.

In the last few weeks, although no greater incidence than normal, there have been several stingray injuries in Laguna Beach. As a general rule, enter the water doing the “stingray shuffle,” sliding feet across the sand instead of taking steps will warn the ray to swim away.

Residents and year-round ocean swimmers Jan Sattler and Mia Davidson remind beach-goers that Laguna is no-take conservation area where collecting and  fishing is not permitted.