What became a recognizable California icon and a small work of art by Charles Christian Nahl is one of the stars of “California Mexicana,” an ambitious exhibition at the Laguna Art Museum running through Jan. 14.

Nahl’s “Grizzly Bear of California,” created in 1854, stands out because “it is the drawing that is the basis for the bear on the state flag,” said museum Executive Director Malcolm Warner of the pencil and watercolor piece.

“California Mexicana” is part of the Pacific Standard Time: LA/LA an initiative of the Getty Museum in Los Angeles. It is an exploration of Latin American art and Latino art in Los Angeles. More than 70 cultural institutions across Southern California including four venues in Orange County are taking part.

Museum spokesman Cody Lee calls the Laguna exhibit “monumental” not only because of the time span it covers (the subtitle is “Missions to Murals: 1820 to 1930”), but also because 50 museums lent works of art for the show. Most recent exhibits included no more than five loans from other museums, Lee said.

Nahl came from a family of artists and was educated at the Kassel Academy in Germany. He spent time in California in 1851 where he tried his hand at mining and began sketching the miners. Finding no gold, he moved on to Sacramento and opened a studio with two partners where they successfully made portraits of miners, which they exchanged for gold. The next year they relocated to San Francisco after a fire destroyed much of Sacramento, according to the exhibit catalogue. 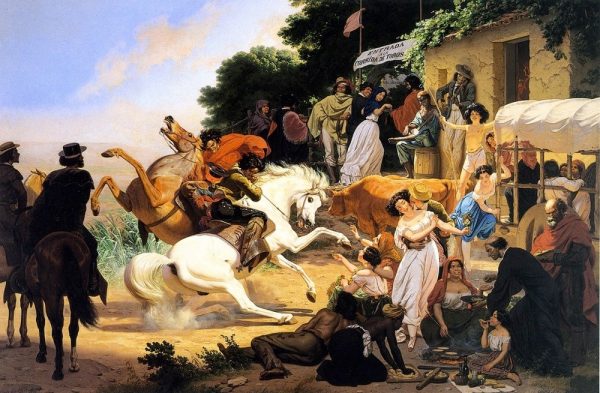 The first outline of a bear on a flag was raised as a political symbol came in 1846 when a group of U.S. settlers marched on Mexico’s garrison at Sonoma and proclaimed California an independent republic. When Nahl’s bear design was used to make a flag in 1911, the red, green and white background, mirroring the colors of the Mexican flag were meant to signify common ground with Mexico, according to the exhibit’s curator, Katherine Manhorne.

Nahl is considered “one of the leading artists depicting pioneer life in California,” according to the Society of California Pioneers. He designed the society membership certificate.

The exhibition catalog calls him “the painter of the Gold Rush era” for his creation of large-scale paintings, flags and designs and certificates for civic organizations.

The Society of California Pioneers’ membership certificate, which also includes a grizzly, is included in the exhibit. So are Nahl’s “The Fandango” and “La Plaza de Toros: Sunday Morning in Monterey,” two oil paintings measuring 6 by 9 feet. Another oil painting, only slightly smaller, “Miners in the Sierras,” made with business partner August Wenderoth, is also on display.

“California Mexicana” follows California’s transition from rule by Spain and Mexico and eventually its admission as the 31st state in 1850. The exhibit, three years in the making, used as a starting point the oil “San Gabriel Mission” by Ferdinand Deppe, part of the museum’s permanent collection. From mission life to rancheros, vaqueros and the gold rush and the Mexican American war, the exhibit’s works convey how people, goods and ideas moved freely throughout the region. Several works herald the arrival of the American and Mexican railroads marking the transition of rural, agrarian life to modernity.

Oils, lithographs, watercolors and other mediums including film and graphic art give the visitor a glimpse of “the second gold rush,” the invention of the citrus growers exchange, and the Mexican Revolution. The show also demonstrates the artistic kinship between Mexican and California artists.

“California Mexicana” showcases works by prominent Mexican artists such as Frida Kahlo and Diego Rivera, as well as California luminaries such as Edgar Payne and Millard Sheets and lesser-known artists including Xavier Martinez, Casmiro Castro and Antonio Maria Osio.

For the first time, exhibit labels are printed in Spanish as well as English. And the exhibit has proved popular for school field trips. Nahl’s “Grizzly Bear” is of particular interest to fourth graders studying California history, Lee said.