The section of Laguna Canyon Road where an art student from France was fatally injured had long been known to her college, city officials and Caltrans as a crossing in dire need of a traffic signal.

Fine art major Nina Fitzpatrick, 22, died this week after being struck April 3 by an elderly motorist from Minnesota, who told police she failed to see the pedestrian as she drove her car past Laguna College of Art and Design, headed towards the beach.

In aftermath of the fatality, city and school officials this week stepped up pressure on Caltrans to install a signal near the campus, which was authorized last fall, according to a Caltrans spokeswoman.

“This tragedy could have been averted with the installation of a stop light, foot bridge or tunnel to allow students safe access the campus,” said student Sandy Manich, a friend who intended to spend Thursday evening at a vigil alongside the state highway.

On her Facebook page, Fitzpatrick, of Fountainbleau, France, posted photos of herself with a surfboard and light-infused paintings-in-progress of breaking waves. The 22-year-old who lived in Irvine, described sustaining a few bumps while taking photos with a Gopro camera at one of Laguna’s favorite surf breaks, Thalia Street, which she described as her “home away from home away from home.”

The driver who struck Fitzpatrick, an 83-year-old Minnesota woman, was not arrested or cited at the scene. Alcohol does not appear to be a factor in the crash and but preliminary information suggests the driver failed to see the student, Capt. Jason Kravetz said.

Police say the investigation is continuing and once completed will be submitted to the district attorney’s office for consideration of appropriate charges.

While a pedestrian crosswalk and warning signs have been installed near the main campus and a bus stop, the college’s president and its trustees have argued for improved safety measures that could impact traffic along the heavily used artery.

Even before the recent tragedy, statistics show Burke’s concerns have merit. Of the 45 traffic collisions reported in the 2000 block of Laguna Canyon Road between March 2013 and 2008, 33 took place at 2222 Laguna Canyon Road, the college’s address, according to statistics compiled by Laguna Beach police.

A study of foot traffic and car traffic at the crosswalk and driveway of the main campus on May 2 last year determined that the crosswalk alone justified a more robust traffic signal, known as a high intensity activated crosswalk, Caltrans spokewoman Cindy Azima said. 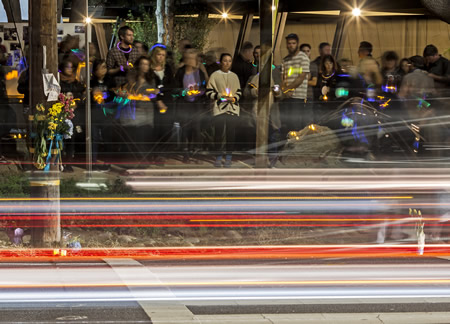 While a pedestrian now triggers a flashing light at the crossing, the newer version would set off a red traffic light signaling motorists to halt, according to Steve May, the city’s public works director, who learned last July that Caltrans intended to install the device.

The project, which will cost $75,000, is currently in the design stage, Azima said. “Caltrans recognizes this is a tragic event,” she said. “We’ve told the city we’re going to do everything we can to expedite.”

Some have raised concerns that a traffic light at the crosswalk, while improving pedestrian safety, might make summertime traffic jams worse. An overhead pedestrian crossing, offering safe passage without slowing traffic, is a prohibitively expensive alternative, Burke said last year, as it would require an elevator to meet access requirements for the handicapped.

In the meantime, the college runs a shuttle from 8 a.m. to 10:30 p.m. to ferry students to the college’s myriad facilities that have sprouted in recent years up and down the canyon. College officials implore students to eschew the faster route of using the crosswalk in favor of the safer, if longer route by shuttle.

Safety was also on the mind of Hélène Garrison, the college’s vice president of academics, who said in a statement, “Out of this moment of sadness, let’s all make a special effort to watch out for and take care of one another.”

Hope Railey, the college’s chair of fine arts, recalled Fitzpatrick’s vibrancy. “She provided life to our campus through a constant smile and a genuine passion for life. Our thoughts and prayers are with her family and friends across the world and here at LCAD. Our lives forever will be touched by Nina.”

At the vigil, Burke will announce that part of the  college’s main campus will be renamed Nina’s Park.