What are lawns, and what is their purpose beyond easily identifying where a dog craps? When did sod and turf become ubiquitous replacements for natural landscapes? Well, we can thank our bloody forbearers, the British.

You see, in our never-ending Anglo-Envy, wealthy Americans in the late 19th century visited England for tips on gallantry and returned home with visions of luxurious grass carpets that were then the province of entitled Brits. Never mind that it took an army of laborers to painstakingly maintain them with scythes.

So lawns really didn’t catch on until the industrial revolution ushered in hand-mowers, and the Department of Agriculture collaborated with U.S. Golf Association (ahem, Anglophile alert!) to develop a super resistant sod that could proliferate in America’s rich bio-diversity. Now every working class American could live like a king, with a lovely lawn to surround their little castle. No wonder they called it the American Dream. It’s all an illusion, a paean to a false prosperity that worships domesticating nature over coexisting with it. 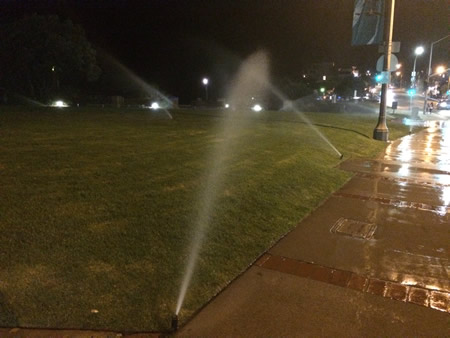 Lawns are one of the last remaining excesses of the Empire – along with polo, Marmite and Sundowners (those lovely gin and tonics they enjoy in colonized lands). Well, the Empire collapsed a century ago, and lawns are ready for their decomposition as well.

It’s a different world now. The drought is spectacularly real. We are facing a crisis of calamitous proportions. On June 11, Transition Laguna hosted Jay Famiglietti, a senior water scientist at NASA’s Jet Propulsion Lab, and the national media’s go to drought guy. He showered us with scientific evidence that groundwater, our primary source of water, is drying up at an ever increasing rate. That summer we had last winter? That’s a record-setting dry spell.

So let’s start being real. That water we import now – meaning 100% of our water- is from the Delta or Colorado rivers. Very far away, and water rights will get very contentious. We are at the losing end of that argument. Literally.

Second, there are no magic bullets. Desalinization is wildly expensive, inefficient, and polluting. And they take 20 years to build. We don’t have the time, money, or real estate. Ditto aqueducts from exotic, faraway places. There are towns in California, right here and now, where faucets don’t run. And their water is trucked in and distributed in small bottles. Imagine taking a bath in Aquafina.

But we have a chance, if, as Jay suggests, we change our relationship with water, and treat it as the precious commodity it is. Sparingly, with great care, and only when needed. And then recapture, recycle, and reuse it. Again and again. Instead of plundering millions of gallons each day into our ocean, never to be seen again. It’s the very essence of permaculture and living in sync with the planet and the new way forward in a world of prolonged scarcity.

But killing lawns is the single biggest thing we can do to save water. Right away. The city is encouraging and making it easy for homeowners to do it. But what about the city walking the walk with those 15 acres of turf in our parks and civic buildings? They require 15 million gallons of water a year. At a gallon per person per day, that’s nearly two years of drinking water for everyone in Laguna.

Yes, the city removed the grass from the median on Laguna Canyon Road. But we can’t just pat our backs and think that we’re done. That’s only about 750,000 gallons saved annually, about 5% of our savings potential.

So let’s make a bold statement that we’re serious about water conservation and kill our most public statement of unnecessary profligacy – the lawn at Main Beach. Sacrebleu, I might as well pin myself to the cross now.

But come on, check out the criminal waste of potable water on a recent Thursday night. As long as we continue to see lush green carpets we will continue to somnambulate over the water crisis and waste precious drinking water. This is a sign to visitors and locals alike that Laguna is serious about water preservation. And that they should be, too.

What would we put in its place? Why sand of course. Or decomposed granite. With perhaps an elegant hedge of natives and succulents along the highway. And maybe add a meandering bike path. Or how about this – drum roll please – we install our cherished skate park. Bam. Two birds with one stone.

It really is the best location for it. Right on those underused cobblestones and away from neighborhoods. Accessible. On display for the public’s enjoyment. The noise buffered by the traffic on Coast Highway and the Pacific. But off I go on a horrible tangent that will only get me in trouble and have people compare me to Randy Quaid, when all I really dream of is to never see those sprinklers wasting my drinking water again.

Next week, I’ll discuss an even bigger solution.

Billy Fried sits on the board of Transition Laguna and the Laguna Beach Community Clinic. He hosts “Laguna Talks” on Thursdays at 8 p.m. on KX93.5 radio, and can be reached at [email protected].