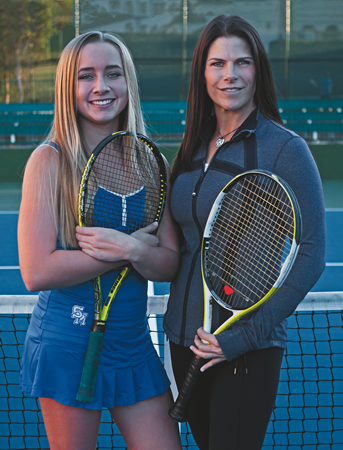 Jennifer Gustafson will always remember June 1. A letter arrived that day saying that a recent medical tests her daughter Dillon had taken identified a potentially fatal heart defect. Moreover, the threat was considered so imminent, the letter warned, that Dillon should cease immediately any activity that could excite her heart.

Ms. Gustafson raced to Dana Hills High School, where Dillon was ready to take part in a tennis tournament. Her mother pulled her off the court. Dillon had to see a cardiologist as soon as possible.

A screening that seemed a simple formality turned out to be life altering, but fortunately for Dillon the resulting set of circumstances would not be life changing. Initially, the 14-year-old’s activities — playing tennis, running and participating in junior lifeguards – had to halt. At first, Dillon admits she did not realize the potential gravity of her condition.  “I could go to the beach but my mom had to drive me, then I could stand on the beach but not swim. And when I heard about the surgery, I started crying.”

The screening policy imposed by Dillon’s school perhaps saved her life. Due to the death of a cross-country runner, who died from undiagnosed heart disease a few years ago, Dana Hills required athletes like Dillon to undergo some physical tests before competing. Her school offered screenings through Laguna Beach-based Heartfelt Cardiac Projects, a non-profit created by local resident Holly Morrell to provide low-cost screenings to avert future needless tragedies.

At Laguna Beach High School, an EKG is not required of athletes who do undergo mandatory physicals by physicians, said Asst. Supt. Nancy Hubbell.

Knowing about the condition was hard for Dillon to accept, but equally difficult was the wait for a confirming conclusion from a cardiologist. “Even if they tell you how important this is, you have to wait in lines,” Ms. Gustafson said. “It took weeks to get into the cardiologist.” While waiting for her daughter to be seen, the mother started questioning the test’s conclusions since Dillon showed no symptoms. She even asked the family doctor to examine Dillon, who also spotted an unusual delta wave in the electrocardiogram test and asked how the family found out about that heart condition. The second opinion put the mother’s mind at ease.

Surgery to correct the anomaly went well and Dillon is again swinging at the baseline. “As a mother, I wanted to be strong, but it was hard,” said Ms. Gustafson. “Now everyone in the family has been tested and we are really thankful to Holly and the work she does with the Heartfelt Cardiac Projects. We were very fortunate that she was there.”

Thank to grants and donations, the non-profit organization offers screenings for an $85 donation rather than a fee that Morrell says could be as high as $1500.

The organization’s next screening during American Hearth Month is scheduled for Feb. 25 at Laguna’s Sport Performance Institute from 8 a.m. to 4 p.m. at 2295 Laguna Canyon Rd.

Screenings can be scheduled at http://heartfeltcardiacprojects.org.

Cardiovascular disease remains the nation’s leading cause of death, according to the Centers for Disease Control. Raising awareness about the risk of sudden cardiac death remains the goal of Heartfelt Cardiac Projects. Screenings identify a range of heart anomalies with electrocardiogram and echocardiograms devices as it did when detecting an unusual heart rhythm in Dillon and several others last year.

“I really believe in what they do and that is why I volunteer my time to help them,” said Laguna Hills cardiologist Suzanne Feigofsky. “Sudden cardiac death is hard to detect because there are no symptoms. Only 1% of the tests we make reveal a heart condition. But even if we save one life, that is worth it,” she said.

Morrell founded Heartfelt Cardiac Projects in 2007 but she has worked to provide free screenings for more then 10 years. In her family, six people have died from heart disease, deaths that darkened her childhood.

“At that time, I did not know what a cardiac arrest was,” said Morrell, who is 45. “I just knew that my lived ones were dying. It was more about dealing with death then actually heart disease.”

As an adult, she wanted to take a proactive approach and became an advocate to try to provide an early detection program. She started screenings in 1999. Three years later, she was also diagnosed with a heart condition and underwent surgery. Now, thanks to an implanted defibrillation device, she is also back on the tennis court. She also hikes.

Recently, the Laguna Beach Community Foundation issued an $8,000 grant to Heartfelt Cardiac Projects. “Our grant was directed for use in the Laguna Beach screening programs,” said Darrcy Loveland, the foundation’s president and chief executive.

Morrell would like to see more locals take advantage of the resource, which draws clients from around the area. “I would be thrilled to welcome more people from our town,” she said.