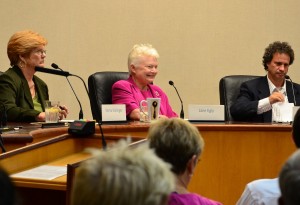 With little disagreement on most issues, the only real divide between City Council candidates during their first public debate Tuesday was over supporting an open-space initiative on the Nov. 6 ballot.

Originally supporting the tax measure to acquire more open space in Laguna’s hills, candidate Steve Dicterow, one of five candidates vying for two council positions, said he won’t vote for the initiative. “If we don’t have either a special circumstance or an emergency situation, I’m not going to be supportive of a special tax,” said Dicterow, a pension attorney and former council member.

The initiative asks voters to approve a $10-a-month tax on each parcel of property to buy undeveloped lots scattered throughout town.  The tax would remain in effect for 20 years, collecting up to $20 million, which would purchase and preserve a total of 550 acres.

As examples of supportable self-imposed tax measures, Dicterow referred to previous tax measures approved by voters to purchase open space in Laguna Canyon 20 years ago and to make repairs after the 2005 Bluebird Canyon mudslide.  He added that this year’s open-space flat-tax measure, which requires two-thirds of the vote to pass, is “especially seductive” because it proposes a relatively inexpensive rate.

First-time council candidate Bob Whalen, a municipal financial attorney and current planning commissioner, said he supports open space but also won’t vote for the measure.  “It’s not the right time for a parcel tax,” he said.

Whalen said he prefers an ad valorem tax formula based on varying property values rather than a flat rate.  “The initiative to buy the canyon was based on property values, not a flat tax,” he said.  With the flat tax, the owner of a vacant lot pays the same as the owner of an expensive oceanfront home.  “The economy is still in fragile condition and a lot of people are struggling to get out from under it.  It is a lot of money for some people,” he said.

Incumbent and mayor pro tem Verna Rollinger said she completely supports the measure, adding that it will increase property values. “To preserve that open space preserves our quality of life,” she said.  “It is possible that those lands will be built upon in the future if they’re not preserved.”

Jane Egly, mayor and the second incumbent seeking re-election, also supports the measure but is concerned about money for maintenance.  “There’s not a very large percentage of it set aside for that,” she said.  For the first time on a local open-space measure, the city will be required to set aside 4 percent of the assessment to maintain the open-space acquisitions.

Candidates were also asked about the decades-old and controversial plan to build a village entrance across from the Festival of Arts’ grounds and the nearly equally long debate about what to do with traffic, the worst problem in town, according to a community survey.  All candidates agreed that some additional parking was necessary but preferred to start with a park over a parking structure at the village entrance.

Dicterow added that Laguna’s congestion is not for lack of parking but poor traffic circulation.  “There’s just too many cars in too little space,” he said.

Saying he walked to the meeting, Whalen supports more walking and bicycling in town and sees traffic not as a summer problem but as a constant problem.  “I would move parking from downtown to get a pedestrian feel there,” he said.  He, as well as candidate Ross, supported underground parking.

“We all agree that the esthetic qualities of the area need to be improved,” Dicterow commented on the village entrance.  “Let’s work on that first.  That will be the least expensive.”  Ross suggested adding equestrian trails.

As for other priorities, candidates agreed that the city’s pension fund needs reforming, with the possibility of requiring municipal employees to contribute towards their retirement  as police and fire employees now do, instead of the city paying the full amount.  A 50-50 split as well as a 401K plan were mentioned as options.  Ross suggested cutting costs by reducing the $5 million set aside by the city for legal services.

Egly said she’d like to see the city more consistent in putting aside money for pension funds and employees more reasonable in their retirement demands.  “When times were good, none of us were worrying about people’s pensions and what their salary was,” she said.  Money needs to be put away in good times, she said, so that the funds are there in sparser times.

With disaster preparedness and public safety high on all candidates’ lists, incumbent Rollinger said she’d like to see the city capture storm water and recycle and conserve tap water rather than depend on what she called unreliable and increasingly expensive imported water.  “We’re just turning on the tap for everything and that tap may not always be running,” she said.

Even though the city’s Police Employees’ Assn. endorsed Whalen and Rollinger, Dicterow said he’ll continue to place public safety as his top priority, including increasing armed patrol. “We need to have a constant presence downtown, at Main Beach and in the Heisler Park area to create a visible deterrent,” he said.  “That’s the most important thing we need to be doing.”

All candidates agreed that the trolleys offer a viable alternative to driving in town and would consider continuing the service throughout the year, as well as expanding the use of the city’s blue-line bus service.  “If I could take my dog on a bus, I could walk downtown and run my errands,” said Rollinger.  “Walking down the hill is fun, walking up the hill with packages is no fun.  So Sophie and I would like to take the bus.”

The candidates’ forum was organized by Village Laguna, a group dedicated to preserving town character.