Baseball (11-10, 3-3)
Marina’s Gabe Geiger doubled home Joey Murphy to lift the Vikings to a 3-2 tenth inning walk-off victory over Laguna on Tuesday at the Viking diamond. Breaker’s ace Nick Bonn pitch seven innings allowing two runs and striking out 12. The game went two 1/3 extra innings before the hosts scored the game-winning run.
Breakers got on the board early when Tyler Montgomery’s fielder’s choice allowed Bonn to score. Marina went ahead 2-1 in the fourth aided by a Laguna error. Breakers tied the game in the fifth inning when Griffin Naess doubled home Montgomery. The game remained scoreless until the 10th.

Going into last Thursday’s league games, Corona del Mar is 5-1, Laguna 3-3, and both Newport and Marina are 2-4. Breakers closed out with Marina on Thursday at home followed by a series next week with Corona del Mar at home on April 20 and at the Sea King’s field on April 23. Only two league teams are guaranteed a post-season spot.

In the Ryan Lemmon tournament last week, Laguna finished tournament play with a 2-2 record when they defeated Brea-Olinda 5-4 on April 6 in Irvine. Naess scored after Shea Blanchard hit a deep fly to center field to provide what proved to be the winning run. Hayden Farrington was the winning pitcher against the Wildcats who still lead the all-time series with Laguna 35-27-1.

Individual game and season statistics can be found on Max Preps.

Beach Volleyball (7-3, 5-1)
The final Sunset League game with Marina was cancelled and the first Sunset League Beach Volleyball season concluded on April 7. Huntington Beach won the inaugural title with a 7-1 record followed by Laguna (5-1), Edison (5-2), Los Alamitos (4-3), Newport Harbor (3-4), Marina (2-4), Corona del Mar (1-6) and Fountain Valley (0-7). No CIF sponsored team playoffs were held this season. The pairs tournament was held last Friday but the results for the event were not provided.

Boys Golf (0-10, 0-4)
League play concludes after Spring Break with a match on April 20 with Edison and two matches the following week.

Boys Tennis (6-7, 1-2)
League competition resumes on April 18 at Newport Harbor followed at Marina on April 19 and home for Edison on April 25.

Girls Lacrosse (JV – 7-2, 7-0)
Girls Lacrosse defeated Los Alamitos 8-2 at the Griffins’ field to stay in the lead for the JV title. Breakers are not fielding a varsity team this season. League play ends on April 21 with Corona del Mar at home.

Individual game and season statistics can be found on Max Preps.

Swimming
Chase Shipp competed in the Sunset League regular season Dive meet held on April 7 at Los Alamitos and won the boys competition with a score of 475.65.

The Breakers final league dual swim meet is April 20 with Marina at the Laguna pool. League finals are April 27 (Dive) and April 28.

Track & Field
The Wave League dual meet season has concluded and the league meet is on April 29.

The season concludes with three matches next week: at Newport on April 19, at Corona del Mar on April 21 and hosting the Golden West League champs, Garden Grove, on April 22. Varsity Game and season statistics can be found on Max Preps.

Looking for the latest Laguna scores, rosters, and schedules? Go to the department website for the updated schedules and where the scores get posted first for all levels! 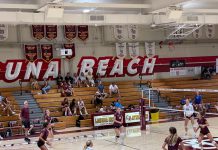