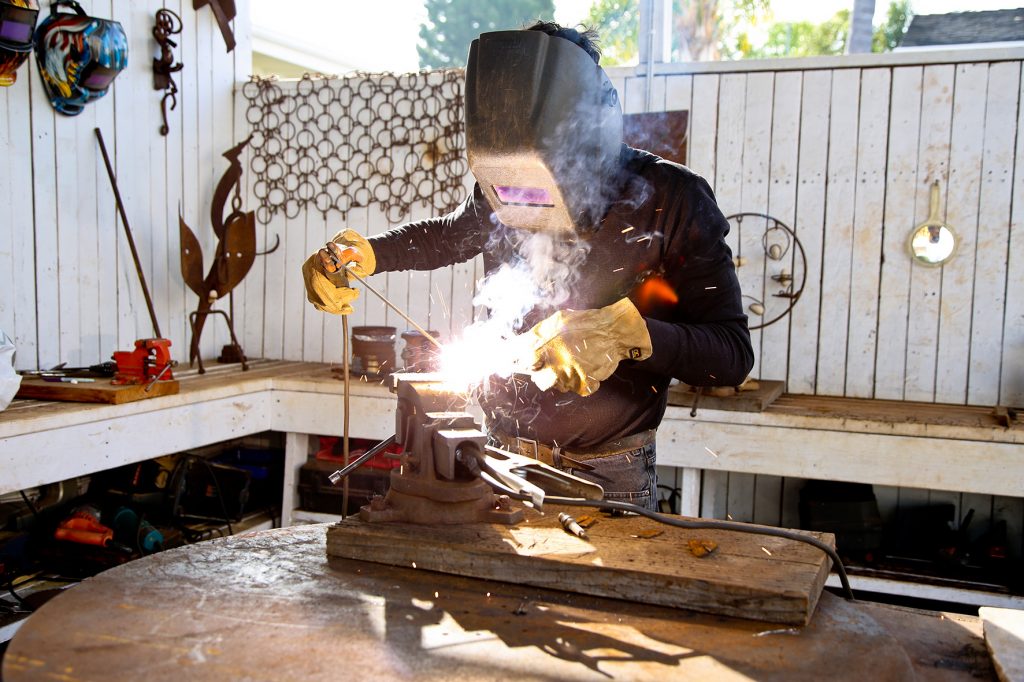 Growing up in a small Wisconsin town, Shamus Koch—then known as James Koch—didn’t realize that his Mark Twain-style childhood would one day set him on a path to become a Laguna Beach-based artist known for his “green” art before the term even existed. At the time, his favorite activity involved pulling a red wagon to the town dump to discover discarded treasures that he could later repurpose.

Those were some of his first forays into found-object art. Among his initial creations from the Newald, Wis., dump was a go-cart that he repurposed from a baby stroller by cutting off the wheels and attaching them to a two-by-four so he could coast down the main hill in town.

The toys of his childhood evolved into found-object creations known for their whimsy and humor. Using only an arc welder, vise, helmet and leather gloves as tools, he crafts inspired works that give new meanings to forgotten man-made objects of all kinds—think horses made from a rocking chair’s legs and herons constructed from old saw blades and pitch forks.

The pieces have been displayed at the Sawdust Art Festival for the past 17 years, and this year marks Shamus’ 18th anniversary as an exhibitor at the event that brings together about 200 artists and craftsmen annually, providing him with a venue to highlight the profound messages of sustainability and human rights evident in his work.

Today, the artist once known as James has taken on the name Shamus. “It’s just Shamus,” he says, adding that he prefers the Gaelic name and its two-syllable ring. Last year was the first year he listed himself as Shamus in the Sawdust Art Festival’s directory.

At 63, the artist believes he was born to be a sculptor. “All my life I’ve been doing art,” he muses, noting that he first began drawing as a child. “My mother realized I had an inkling to be an artist.”

According to Shamus, she gave him a box of crayons and paper—never a coloring book. “You can draw your own pictures,” she told him.

“I wouldn’t have stayed in the lines anyway,” he says.

In hindsight, it’s stunningly clear that the free-range kid who learned to make his own fun in a lumber town of 180 people was destined to end up an artist in Laguna and an exhibitor at the Sawdust Art Festival. His father was a lumberjack, and Shamus worked at the sawmill beginning in eighth grade through high school, sweeping sawdust and helping with general labor. “Sawdust was in my blood,” he says.

By the age of 12, he thought Pablo Picasso’s Bull’s Head sculpture, made from a leather bicycle seat and handlebars, was “the hottest thing I ever saw.” Years later, while a student at the University of Wisconsin, Stevens Point, he was exposed to the work of Alexander Calder, an American sculptor known for his abstract mobiles. Shamus loved Calder’s Circus, a diorama-like piece made from wire, wood, metal, cloth, yarn, paper, cardboard, leather, string, rubber tubing, corks, buttons, rhinestones, pipe cleaners and bottle caps—a found-object masterpiece.

After graduating, Shamus put his fine arts degree to good use teaching art in nearby Wausau. Meanwhile, he simultaneously ran a graphic arts business out of his basement, designing logos and T-shirts throughout the 1970s.

In 1983, he relocated to the West Coast. “I moved to Laguna to escape the Midwest winters and to be in the Sawdust Festival,” he says, explaining that he first came to the Southern California beach town on a vacation in the early 1980s, during a period when he was living in Chicago. After arriving in town, he immediately decided that his goal was to buy a home in the area and be close to the ocean. He rented a detached garden apartment in the back of a home on Catalina Avenue and, in four short years, his dream came true when his landlady sold him the Spanish-style house built in 1927.

The home is now his everything: studio, workshop and front-yard gallery. Shamus shares the yard with—among other art pieces—two electric blue horses made of barbed wire that “graze” near a fountain and a third stallion with tire chains for its mane and a body made of rusted scrap metal from an old recliner. “I’m living the dream, quite frankly,” he says of the setup.

But it wasn’t always art for Shamus. Before his work took off, he spent time as a server at the now-defunct Cottage Restaurant, painted houses, laid flagstones and built booths for exhibitors at the Sawdust Art Festival before he was even invited to show his own pieces.

Shamus was well-known around the festival grounds, having previously helped many of the artists build their booths. One year, an artist elected to drop out of the festival after only a week of exhibiting. “I had all these sculptures, and they asked if I would fill the spot as a guest artist,” Shamus says. At the time, his sculptures primarily consisted of balanced rocks; one piece, titled Pears Thinking or Ode to Rodin, simply featured two pear-shaped rocks leaning against each other.

The next breakthrough came with the addition of a new tool to Shamus’ creative arsenal. A friend who owed the artist money instead paid him back by buying him an arc welder from Sears. “My whole world exploded,” Shamus says of receiving the tool. Later, he received a circa-1880s vise from a friend. “[The vise] is the backbone of my whole workshop,” he says. “Truly, the vise was instrumental in my career.”

At his Sawdust booth today, visitors can witness recycled, welded industrial scrap being turned into imaginative sculptures: Pitchforks become rooster tails while spoons become eyeballs on a heron. “My abstract work is punky, in your face and fun,” he says, adding that he draws collectors of all ages and artistic backgrounds to his booth on a continuous basis.

His top sellers at the festival, he says, are “chakis,” which he describes as “ornamental objects of no significance.” The chakis are hearts, stars and crosses made from wood, stone and wire that most closely resemble contemporary takes on traditional Mexican folk art. The mementos cost between $15 and $35 and fit inside most suitcases—affordable, portable souvenirs for out-of-town visitors.

Along with displaying his own work, Shamus teaches wire-sculpture classes at the festival. “My game plan is to die at the Sawdust,” he says. “I can never retire. It’s a remarkable place to spend a couple of months in the summer—all my best friendships have stemmed from the Sawdust.”

Though he creates in Laguna, Shamus still sources his found objects from a scrap yard in Wisconsin, where he has established a relationship with the owner over the past 18 years. When the owner knows Shamus is in town—he flies in twice a year—he’ll create a pile of scrap specifically for the artist to dig through. Pipe wrenches, pitchforks, chains and more can be found in the stack, just waiting for the artist’s touch to transform them.

“Most everything is found in Wisconsin,” Shamus says. He used to forage for found objects locally, but says his search only led to recycling centers rather than the kinds of scrap yards he prefers. “It’s not what it was, but what it can be,” he says of his process for selecting pieces. “The piece tells me what it wants. I might have an idea as I start, but it changes.”

In the meantime, he also continues to maintain the family property in Wisconsin. He enjoys his travels to the Midwest, he says, because of the contrast with Laguna and the Sawdust scene. When in Wisconsin, he’s able to savor the serenity and obscurity of his hometown.

He takes inspiration from his surroundings in Laguna and adds that, between 1987 and 1996, the ocean was his foremost inspiration. Combing the area’s beaches, he’d bring home items like bricks that had been rolled smooth and round by the ocean. “After a winter’s storm, I found the most amazing stuff—even pieces and parts of sailboats,” he explains.

At times, his pieces approach political territory, but he relies on his senses of humor and whimsy to complement their deeply humanitarian messages. “My message bubbles out,” he says of his commitment to defending human rights. “Call it my political stand.”

In addition, his artistic technique gives new meaning to the concept of sustainability, proving that physical objects can lead multiple lives and be useful in a variety of capacities and across generations. “I didn’t realize I was a green artist until they called me one,” he says. “I was just using objects to make art, then evolved into a repurposed artist. … My footprint has never been very big. I’ve lived my life like that.”